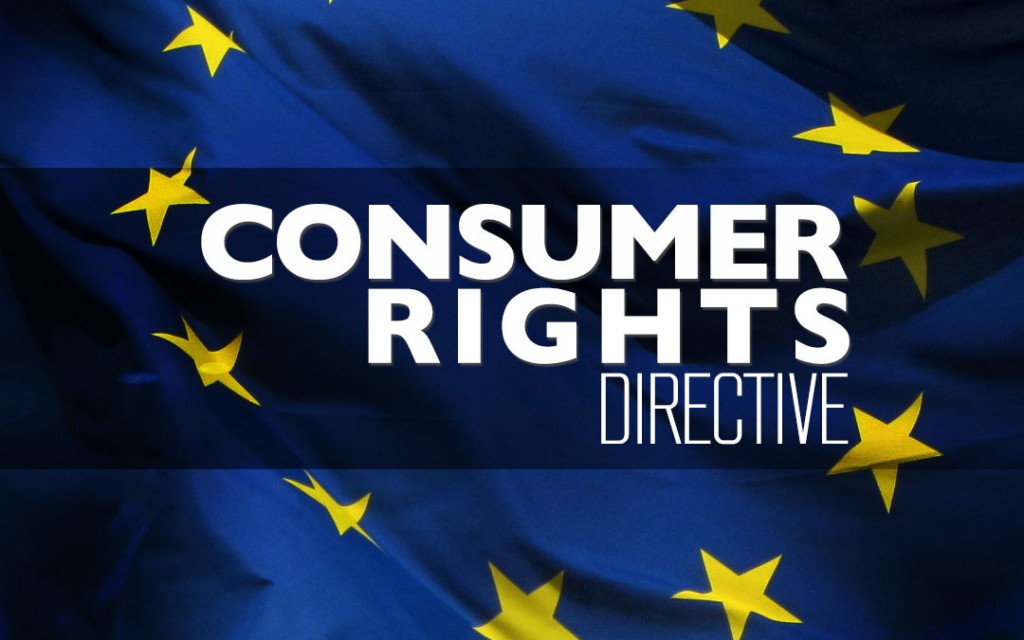 The same requirements for consumer rights across EU will strengthen consumers’ rights protection. Also the same requirements should help for business to start activity in other EU countries, to develop trans-border online trade and improve the functioning of EU’s internal market.

It should be noted that in case of contracts concluded away from business premises (direct selling/off-premises contracts) the new consumer rights requirements will be applicable only if the transaction exceeds 20 euros. So far, stricter consumer requirements are applied only to contracts with a value exceeding 15 euros.

So 10 most important changes for the consumers and business:

Traders will have to disclose the total cost of the product or service, as well as any extra fees. Online shoppers will not have to pay charges or other costs if they were not properly informed before they place an order.

After the Directive will take into force, the consumers will get more information before buying by distance or direct selling. Traders will have to inform consumer not only about the product, contacts of seller, the total price, the payment and delivery options, but also for example about their consumer complaints handling procedure or code of conduct if they are applied. Also it is very important that traders will have to provide to consumers a model withdrawal form which consumer will be able (but are not obliged to) use if they change their mind and wish to withdraw from a contract concluded at a distance or at the doorstep. It will be possible to terminate the contract just making clear statement of withdrawal, but with the EU-wide model withdrawal form it shall be easier and faster to do that especially when goods are purchased in another EU country.

Although in Estonia already it is applied 14 days withdrawal term, however in some member states as UK, Lithuania and others it was just 7 days, so it will be the same 14 days period in all EU countries. Also it is worth noting that currently in Estonia in case of direct selling contracts (contracts concluded away from business premises), the 14 days withdrawal period is counted from the signing of contract, while from June 13th the withdrawal period in all cases will start from the moment the consumer receives the goods. Also:

Traders will have to refund consumers for the product within 14 days of the withdrawal, including the costs of delivery. Trader will be able not to reimburse the additional delivery costs if consumer chosen other than standard delivery method, for example much faster, but also more expensive delivery option (like express delivery). At the same time, traders will be entitled to withhold the refund until the goods have been received back, or until consumer has supplied evidence of having sent back the goods.

Consumer will have to bear the cost of returning goods after they change their mind and withdraw from distance or off-premises contract if trader clearly informs about that. If traders doesn’t inform, so they will have to bear the costs of return. Also traders will have clearly give at least an estimate of the maximum costs of returning bulky goods bought by internet or mail order, such as a sofa or refrigerator, before the purchase, that consumers could make an informed choice before deciding from whom to buy. Also, in case of the contracts concluded away from business premises, if the goods have been delivered to the consumer’s home at the time of the conclusion of contract and these goods cannot normally be returned by post, the traders will have to take the goods at their own expenses.

Currently the trader shall bear the costs of return, just it can be agreed that the consumer will bear the regular expenses relating to the return of the thing to the extent of a sum corresponding to 10 euro, except in cases where the thing delivered or service provided is not that which was ordered.

If consumer agrees to enter into a contract offered by trader by the phone (telemarketing), the trader not only will have to approve the proposal for the consumer in a durable medium, but the contract will be considered as made just after the consumer will send a consent. This will avoid situations where unwanted products are sent on the basis of consumer consent given by the phone and after that it is required to pay for them.

Consumers will be protected against “cost traps” on the Internet. This happens when fraudsters try to trick people into paying for ‘free’ services, such as horoscopes or recipes. With new legislation, consumers must explicitly confirm that they understand that they have to pay a price. Also when shopping online – for instance buying a plane ticket – you may be offered additional options during the purchase process, such as travel insurance or car rental. These additional services may be offered through so-called ‘pre-ticked’ boxes. Consumers are currently often forced to untick those boxes if they do not want these extra services. With the new requirements, pre-ticked boxes will be banned across the European Union.

9.      Eliminating surcharges for the use of credit cards and hotlines

Information about the online sale of digital products will be clearer, including about its functionality, compatibility with hardware and software and the application of any technical protection measures, for example limiting the right for the consumers to make copies of the content. Consumers will have a right to withdraw from purchases of digital content, such as music or video downloads, but only up until the moment the actual downloading process begins.

In conclusion, greater consumer rights and uniform regulation across all EU it is good news for the fair and customer caring business as consumers will be more secure and will be less afraid to shop off-premises or online. Also the same consumer rights regulation will promote a fair and equivalent businessmen competition at the EU level.

It is very important that responsible national authorities would inform consumers about the forthcoming changes, about their rights and duties. No less important – to help prepare for the businessmen, especially for the smallest.